Patients are punished when innovation is penalised 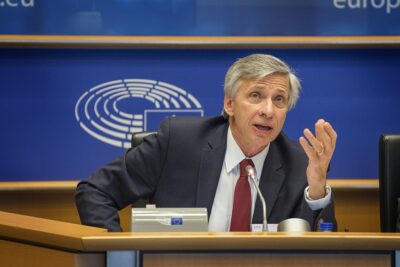 Patients are “punished” due to a lack of innovation-driven structural reforms in a crisis-hit public health system, the head of the Greek pharma industry said in an interview with Euractiv Greece.

Pascal Apostolides is the president of the Hellenic Association of Pharmaceutical Companies (SFEE).

Despite the drastic reduction of pharmaceutical expenditure in Greece, an OECD survey identifies a number of remaining inefficiencies, IE in the use of antibiotics or hospital spending, which are still at very high levels compared with the European average. What is your view?

During the years of the crisis, Greece dramatically cut pharmaceutical spending, which today stands at 50% of the European average.

Moreover, with a closed-end budget in place – which, it is worth noting, has not been established on the basis of epidemiological or no sociological criteria – any scope for savings has long been exhausted. Rationalisation efforts should instead target other cost centres that together account for 85% of total expenditure.

Still, as far as pharmaceutical expenditure is concerned, further rationalisation is feasible, through the completion of structural reforms, including patient registries, therapeutic protocols and the Health Technological Assessment (HTA). We have consistently called on the government to urgently implement such reforms.

Have these reductions led to a deterioration in healthcare provision in Greece? Would you say that Greek patients are now at risk?

The link of expenditure to a rapidly shrinking GDP, the underfunding of the health system, the lack of primary healthcare along with under-resourced secondary care put a burden on public healthcare units in the face of increased demand and have hampered the access of vulnerable social groups. And this does not have to do with the economy alone; it is a matter of public health.

The higher incidence of mental disorders, addiction problems and substance abuse, suicide and mortality from ischemic heart disease are the most visible effects of the crisis on the health of the population (data from National School of Public Health), which are unevenly distributed among the residents of the country, with the lowest social strata facing the highest risk.

The available data and international literature show that the crisis has taken a heavy toll on society, causing a rise in the poverty rate, higher out-of-pocket pharmaceutical costs for patients, less recourse to dental care and other services that are considered luxuries, difficult access to a doctor or a primary care unit, a surge in depression, a large-scale outbreak of epidemics, including malaria, H1N1, West Nile virus but also Hepatitis C and HIV, higher infant mortality, etc.

Decide which cookies you want to allow. You can change these settings at any time. However, this can result in some functions no longer being available. For information on deleting the cookies, please consult your browser’s help function. Learn more about the cookies we use.