SFEE in the 6th Delphi Economic Forum || We must develop a national innovation culture, enhance incentives for investment attraction and improve the system’s funding in tandem, so as to make it more sustainable 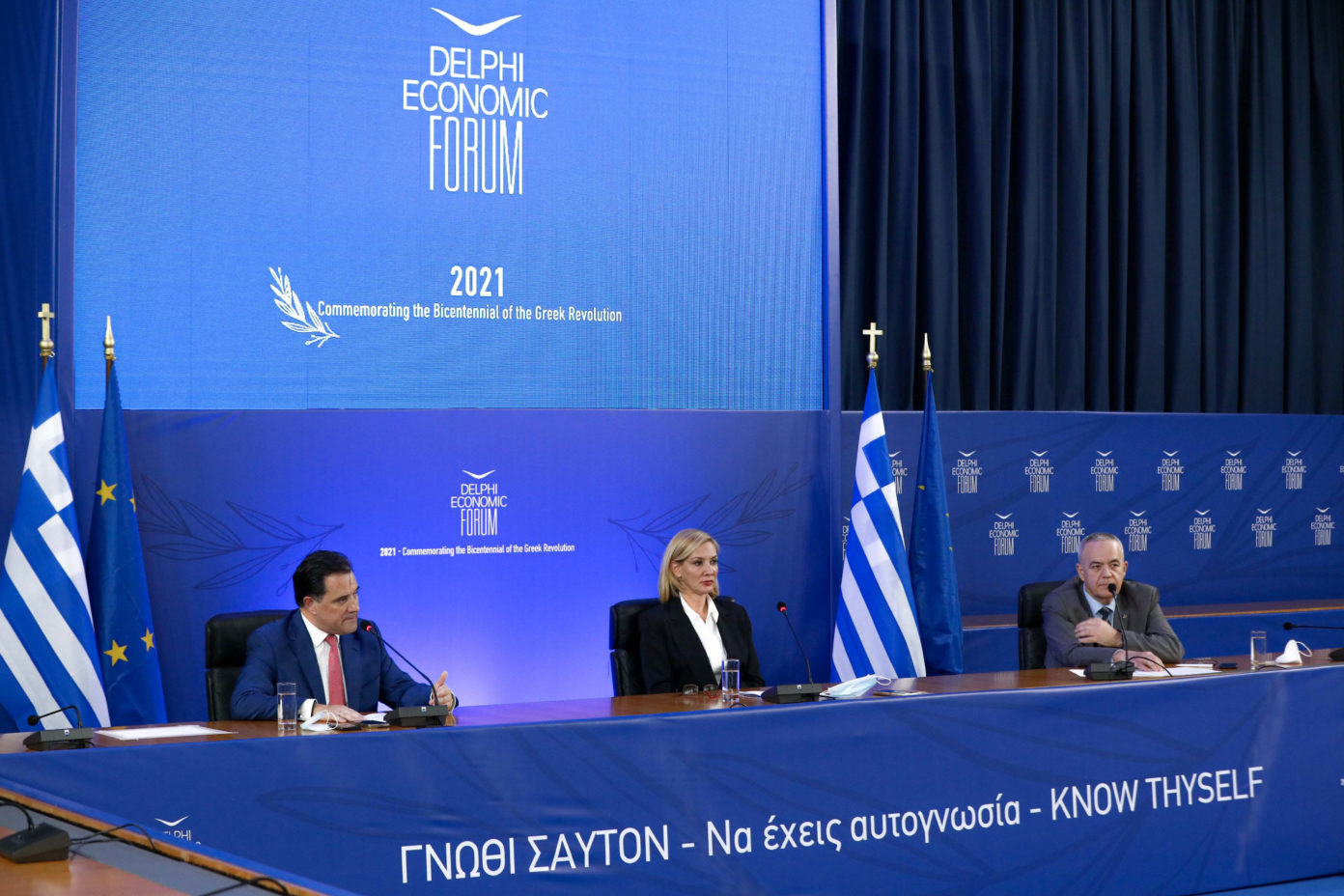 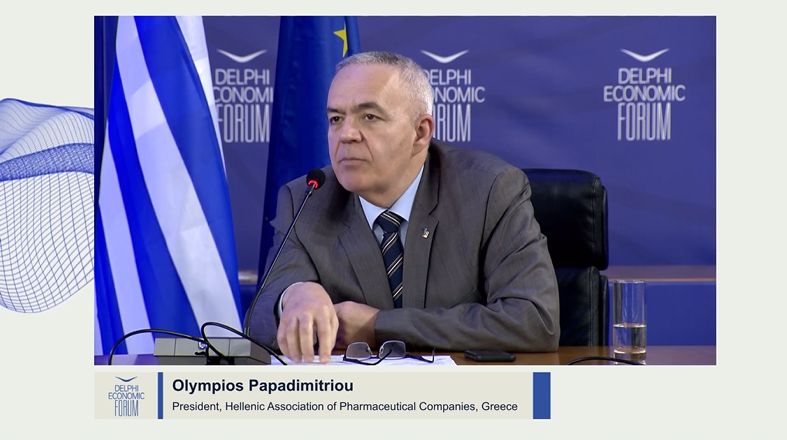 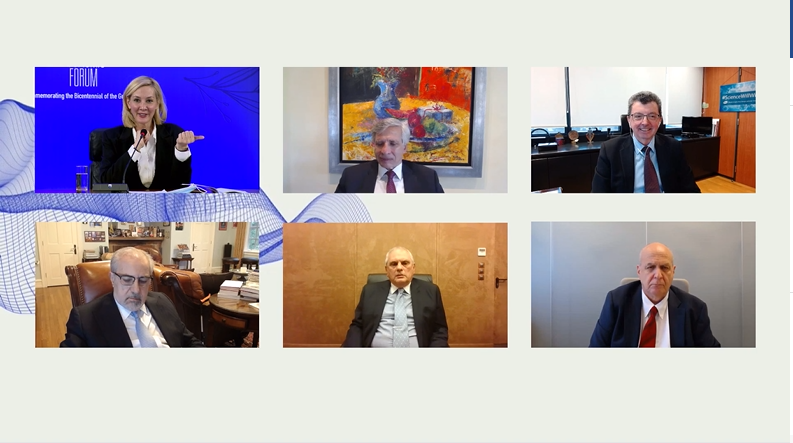 Athens, May 12, 2021.– The Hellenic Association of Pharmaceutical Companies (SFEE) participated for the 6th consecutive year, on May 10, 2021, in the Delphi Economic Forum, held under the auspices of H.E. the President of the Hellenic Republic, M. Katerina Sakellaropoulou, at Zappeion Megaron. During the panel discussion “Pharmaceutical Innovation: The future-proof investment” held between the Minister for Development and Investments, Mr. Adonis Georgiadis, the SFEE President, Mr. Olympios Papadimitiriou, the PFIZER Hellas President and CEO, Mr. Zachary Ragousis, the BIOGEN President, Mr. Stelios Papadopoulos, the ABBVIE CEO, Mr. Pascal Apostolides, the VIANEX Vice-President, Mr. Konstantinos Panagoulias and the BOEHRINGER INGELHEIM Hellas Director General, Mr. Dimitris Anagnostakis,  the emphasis was placed on the importance pharmaceutical production and innovation holds, for the growth of Greek economy and the creation of well-paid jobs.

In particular, the Minister for Development and Investments, Mr. Adonis Georgiadis, stressed that the pursuit of the Greek Government is the consolidation of a stable investment environment for the pharmaceutical companies to be able to invest. He went on to state that, regarding investment clawback, the Government wants to proceed to a more stable, three-year agreement with the Pharmaceutical Industry and the Recovery Fund, in order for a stable professional environment for pharmaceutical companies to be established in Greece, stressing that the investment clawback does not constitute a tax exemption and should therefore not raise an issue of state subsidies. It constitutes an incentive reducing the additional burden imposed by the state, because clawback is an additional burden on pharmaceutical companies in the form of expenditure refund to EOPYY. It actually lifts a part of this additional burden imposed by the State, in exchange for the creation of new jobs, Research & Development in Greece, showcasing the Pfizer investment in Thessaloniki as a first successful example of this investment instrument.

The SFEE President, Mr. Olympios Papadimitriou, noted that the adoption of the investment clawback is an important incentive for investments to be attracted in Greece. He reported extensively the lessons taught, originally during the financial crisis and then through the COVID-19 crisis, both at European and national level, where, amongst others, the necessity for an effective use of public resources, the enhancement of primary health care and the creation of digital/remote systems was proven. He referred to the added value created in Greek Economy by the pharmaceutical industry, contributing a €6.7bil. (for 2019), i.e. accounting for 3.6% of GDP. In terms of employment, the pharmaceutical industry secures 135,000 jobs – i.e. 3,9% of total labour – most of them being of high specialisation, while contributing annually to National Economy circa €2bil. in taxes and social contributions. Hence, Pharmaceutical Industry constitutes one of the main pillars for the development of our country. In concluding, he referred to the challenges the Industry and the State will be facing the day after COVID-19, as well as and the need to create “a culture of national innovation” and have it prevail in the country. “We must develop a culture of national innovation in our country, enhance incentives for the attraction of investments and improve the system funding in tandem, for the latter to become more sustainable and foreseeable. This is the main quest of the companies of the sector, for them to be able to enhance their presence in the country and contribution in the national economy”, noted Mr. Papadimitriou.

The BIOGEN President, Mr. Stelios Papadopoulos, mentioned the discussion launched, following the USA administration proposal for a temporary patent waiver of the COVID-19 vaccines, underscoring that the issue of intellectual property has absolutely no relation whatsoever with these vaccines, and also referred to the safety issues related with the production of those jabs. He also stressed that access to the raw materials necessary for the production of the jabs is already secured for the next three years by the big companies, through contracts. He expressed his estimation that this USA proposal is rather tainted by political overtones and will probably fade out within the next months. He went on to mention the problem of high prices of pharmaceutical products in the USA and patients’ access to them.

The ABBVIE CEO, Mr. Pascal Apostolides, referred to the contribution of Clinical Trials in the development of Greek Economy, stressing the significant development opportunity for Greece to be transformed into a global clinical trials hub and the importance of promoting innovation and investments in Research & Development as a necessary pillar for effective pharmaceutical policy. Following that, he underlined that if we wish our country to “leap-frog” to the European average in Clinical Research in the EU from the bottom step where it currently stands, a €500mil. must be invested.  He stressed, in parallel, his conviction that our country can rise to be a global player in the field of clinical trials and this should become the absolute priority in the government’s planning, as an important perspective for economic development.

The Pfizer Director General, Mr. Zachary Ragousis, referred to the feat of the 1.2 billion jabs worldwide, pointing out the complexity of the jabs production process, not only with regard to the supply of raw materials but also the stringent quality controls effected. He also stressed the need for innovation to become our National Strategy, in order for the country to boost its performance in the European innovation index.

The Boehringer-Ingelheim Director General, Mr. Dimitris Anagnostakis, referred to the need of elaborating a strategy in view of having pharmaceutical production repatriated in European land, mentioning that 6 EU member states have already signed a common paper asking for coordinated initiatives to this effect to be undertaken by the European Commission. He pointed out that the impact the pharmaceutical industry has on National Economy proves the need to have it protected and boosted, through the introduction of incentives. He went on to demonstrate the prerequisite of an open dialogue and co-operation between the Administration and the Pharmaceutical Industry, not only on national but also European level, through the creation of a High-Level Forum where all the interested  parties will be able to be involved.

The VIANEX Vice-President, Mr. Konstantinos Panagoulias, referred to the turn of many Greek pharmaceutical companies towards innovation, as well as the collaborations developed between Greek and foreign companies. Three are the steps to be made for upgrading the Greek pharmaceutical industry: reshaping clawback, dealing with illicit competition from third countries – since licensing of European products is far more difficult – and the turn to biotechnology, through the enhancement of the cooperation between Greek and foreign companies.

Regarding the debate on the COVID-19 vaccines patent waiver, both the President of SFEE and all other speakers agreed that securing intellectual property is substantial, since, had it not been for it, we would never have been able to speak about vaccines now, while any eventual lifting of it does not entail any increase in production capacity.